My apologies for the lack of recent updates.

A combination of chicken pox and being rather busy with other projects has led to this blog being neglected.

Unfortunately the planned meet and greet at the craft fair is sadly not happening, due to a lack of space caused by people selfishly wanting to sell their crafts at a craft fair.

I am still looking for a venue, and would welcome any suggestions.
Posted by Ilkley Gamers at 09:34 No comments:

Email ThisBlogThis!Share to TwitterShare to FacebookShare to Pinterest
Labels: club

Ashlands school is holding a craft fair on 29th of March. I thought it might be a good idea hire a table, hand out some leaflet about the club, and perhaps get people playing some games.

I'm probably going to run some games of Bang!. If anyone would like to join me and run either a simple participation game, or a small demo, let me now.

Posted by Ilkley Gamers at 13:56 No comments:

If there are any gaming clubs or gamers who would like me to link to them on this blog I would be more than happy. Just contact me with you blog, website, forum, Facebook page and I will do the honours.

As it has been a sunny day in Ilkley, I thought it appropriate to post a picture of the foot bridge to Middleton woods.

I suspect the river was higher today, but no matter.

The invitation to gamers and games clubs in West Yorkshire - and beyond - to send me links for the blog was in part due a conversation with Jon at the Beyond Monopoly website, who has been helping me with some technical issues to do with this site, and also offering advice about starting a gaming club.

One of the things I want for this site, other than being a focus for the club, is to be a resource for gamers in the local area. In modern parlance, a hub. Being somewhat of a niche hobby, it is easy to get involved in active and exciting smaller groups and forget that there are wider pools of gamers. As is evidenced at shows and conventions.

Whatever the reason, it would be nice if groups were to reach out to each other, and in doing so bring new people in to what is a very entertaining and absorbing hobby; whether you are a wargamer, historical or fantasy/sci-fi, a role player, board gamer or card player, of the Magic the Gathering variety perhaps.

One of the iconic images of Ilkley is the Cow and Calf rocks that sit high above the town.

For those that don't know the landmark in question here is a picture... 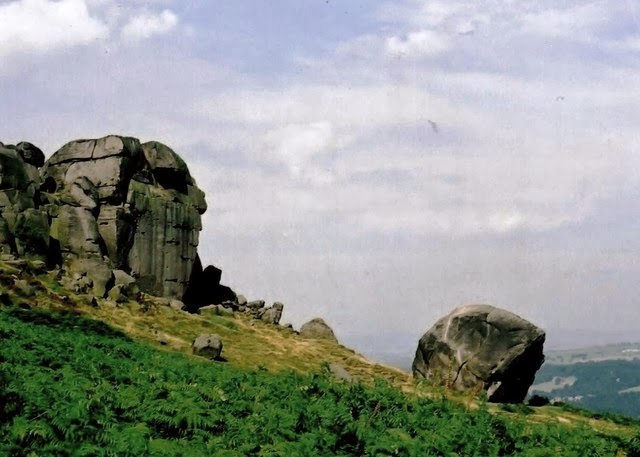 I have been thinking about a logo, as twitter and facebook keep pestering me for a picture. And I guess it would look good on the forum too. So I got to thinking what would be good image that ties together Ilkley, wargames, historical and fantasy/sci-fi, role playing games, board games and card games.

Hence I came up with the Cow and Calf to represent Ilkley, and the brilliant idea of using Photoshop to transpose a dice in place of the calf; maybe with a meeple running away screaming from the tumbling dice.

Unfortunately my technical skills are not up to the challenge of creating this image, nor do I have the requisite software.

So I was hoping that a kind reader would do it for me.

I was asked the other day why I wanted to establish a gaming club in Ilkley.

The question needs slight alteration, as to me the question is 'why now would I try and form such a group?'

The germ of the idea comes from my virtual trips around the interwebz to various forums over the past few years and seeing threads from people in Keighley, Skipton, Otley, Guisley, Shipley, Ilkey, Burley in Wharfedale, Silsden and other surrounding towns looking for people to play games with.

Then there was the spin put on the opening of Little Lane Children's Centre by local media, that it wasn't fair that the council was spending money on things for babies and young children, when there is nothing for teenagers to do. Which is not to say that the intention is for the gamers group to be some sort of youth club, but I do recall an interview with Lawrie Stewart, of GCN, on the Bad Dice podcast in which he said that young people with a hobby were less likely to get in trouble. I remember thinking, as I passed the teenage girls being interviewed outside the Children's Centre, "I bet they would enjoy a game of Carcassonne."

And I have been impressed by the number of community activities within the town since moving here. Gaming is a very sociable activity, and a gaming group would be an excellent addition to the social fabric of the town. Offering the opportunity to meet people from all walks of life, men and women, young and old, and spend a pleasant evening trying to save the earth from a Pandemic, scheming to get them eaten by a dragon, or hacking up their painstakingly researched and painted Vikings.

Though I guess, the reason is partly selfish, as I am in the process of building a WWI trench system to play Through the Mud and the Blood. And I would like somewhere local to play with it. It being rather heavier than I expected - though quite why I thought cutting a 6 by 4 sheet of hardboard into squares, screwing inch by inch batons to it, fitting sheets of foam core and covering it with plaster and sand, would be lighter than the component parts, I can't say.